The Bessin, home of the Normandy oyster

Historically, the Bessin extended from the river Orne to the river Vire in Normandy, therefore making up the western third of Calvados. Today, the area around Bayeux is commonly referred to by this name.

The Bessin is an area with a strong agricultural identity. The west is stock-breeding country while the east, on the Caen plateau, is known for its cereal crops. The sea is an important resource for both fishing (Port-en-Bessin-Huppain, Grandcamp-Maisy, Courseulles-sur-Mer, Isigny-sur-Mer) and shellfish farming (Bay of Veys, Asnelle).

The Bay of Veys is a wide estuary into which the four rivers that criss-cross the Cotentin and Bessin Marshes Regional Nature Park flow: the Douve, the Taute, the Vire and the Aure. It marks the boundary between the Cotentin and the Bessin. The Bay of Veys produces 30% of Normandy oysters, about 10,000 tonnes, including the famous Huitre spéciale d’Isigny.

In these shallow waters, boats enter the estuary only at high tide via two marked channels, one leading to Carentan and the other to Isigny-sur-Mer.
At low tide, it’s a sandy desert of 7 square kilometres.

The natural conditions are ideal for producing a fleshy oyster of high gastronomic quality. In Grandcamp-Maisy, the first scallop fishing port in the Bessin, a dynamic centre for oyster farming has thrived since the 60s and 70s.

It was in this oyster production hub of Grandcamp-Maisy that André Taillepied settled and that his son, André Gilles Taillepied, developed an oyster farming business. The company continues today with André-Gilles’ son, Axel – the work of 3 generations. It produces quality oysters and has been recognised on several occasions with gold and silver medals for its production of Huîtres spéciales d’Isigny. In 2016, it was once again awarded the silver medal by the Ministry of Agriculture at the Concours général agricole de Paris. 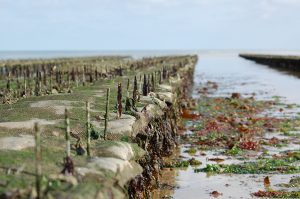 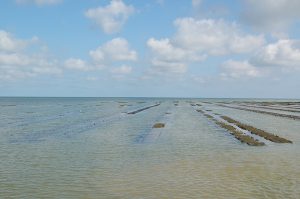